A year down the road

Sunbridge Solar Nepal has come a long way since it officially started its operations in March 30, 2017. Come March 30, 2018 and we are proud to have completed 100 installations in this period of time. We have covered close to 30 districts all over Nepal. We have been fortunate enough to have worked alongside capable and dedicated partners. Some of the highlights of our past year have been : The 74.88kWp Gorkha Water Pumping Project, Rajahar Water Pumping Project supported by Arizona State University, Rolpa Water Pumping Projects and not to mention our very first installation at Women LEAD, Jawalakhel, Lalitpur.

Two roads diverged in a wood, and I—
I took the one less traveled by,
And that has made all the difference.
When we initiated our venture back in 2017, the Solar PV market looked bleak with the uprising of “Kulman Mania”. Doomsday prophecy looked almost certain for the Solar PV businesses here in Nepal and we were really nervy on moving ahead then. The financial institutions offered little help and the Government sector promoting “alternative energy” just seemed “ready to disembark the sinking ship”. The funds allocated for alternative energy projects via the Government agency not being released on time even after a period of 5-6 months after the completion even though “60% payment on goods delivery” is more like “embossed” on Government contract documents has made a huge difference for a start-up such as ours. The liquidity crunch about that time was a double-blow. We are very thankful to our trusty partners in the form of friends and family who extended financial support by providing interest free loans. Jordan Weisman, our mentor and friend, without whom we would not have been able to weather this storm, deserves a huge mention.
We are now all geared up for YEAR TWO which promises a lot with “utility scale solar, grid-tied, hybrids etc” all coming to the foray. We expect to be a part of this promoting Nepal towards “diversification of resources” and at the same time promoting our ultimate goal of “GREEN SOLUTIONS FOR A SUSTAINABLE TOMORROW” 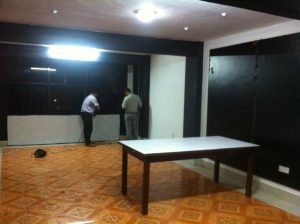 Inspecting the Office Space in 28 March 2017 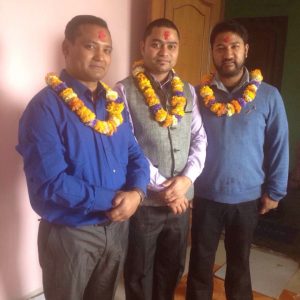 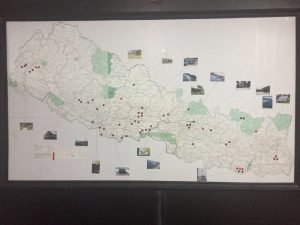